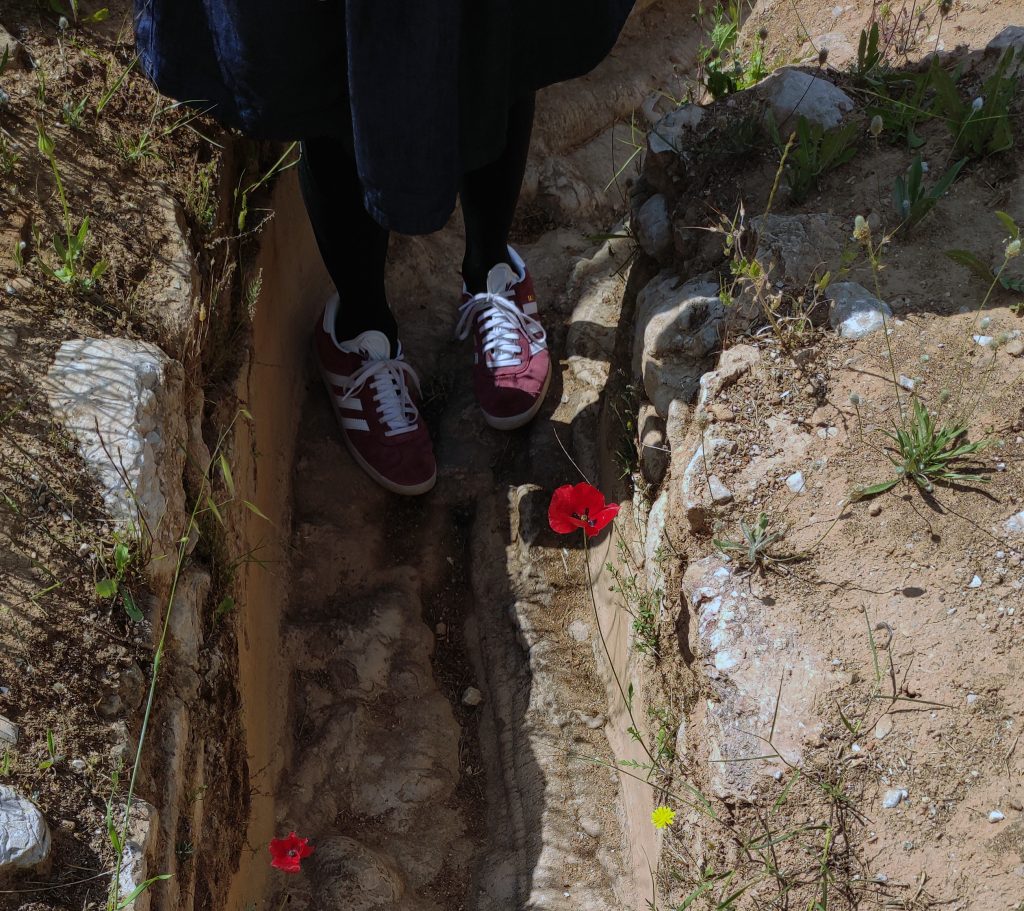 This article has been written by Chiara Lucchini, UIA-expert for the Cultural H.ID.RA.N.T. project, and it first appeared in the UIA-Initiative EU website here in June 27, 2022

The recovery of Hadrian Aqueduct stimulates an important conversation about water as commons, something that belongs to everybody and that as such needs to be preserved, protected and wisely managed. The introduction of a new source into the water supply system of the city is a crucial means to foster a new awareness and collective responsibility on resource management. Hence the Municipality’s task to establish a “water community”, is a multilevel job combining the engagement and empowerment of different actors, the establishment of a new shared water culture, the identification of the most suitable legal and administrative frameworks, the definition of a governance structure and the negotiation about roles and duties for institutions and public bodies, in order to better frame the proactive participation of citizens in the organization and management of this new water service.

Cultural H.ID.RA.N.T. aims at making a new water resource accessible to the citizens of Halandri. The Municipality is using the initiative as a driving force to establish a larger conversation on wise management of resources, civic engagement and participatory management of local services. As the process unfolds some specific conditions regarding the water influence the kind of use that can be done of it and the potential management model for this new urban service.

Hadrian water is not potable: in its four sections running from the hills to central Athens, the aqueduct collects water pouring from the aquifer, but also from streams and other superficial and subterranean water sources (including rain water collected in sewers excavated in the ground). Unless wells are mapped and the ancient infrastructure route is being studied and explored, it is still very difficult to fully reconstruct the origin of its waters. Analysis conducted by EYDAP (Athens Water Supply and Sewerage Company), confirm that the water in the aqueduct cannot be considered as potable according to contemporary standards, but can be purified and used for gardening, clean up of private and public spaces, or other similar functions. 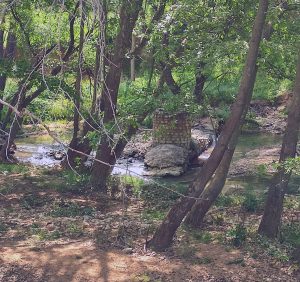 Hadrian aqueduct collects water from the aquifer, but also from streams and other water sources in the territory.

Even if the water is not potable, the possibility to integrate it into the urban water services has a great importance, and a high symbolic, political and social value. With a strong upscaling potential, the experimentation in the making in Halandri could actually pave the way for further ambitious developments in the entire region, involving the other municipalities crossed by the aqueduct watershed. The understanding of water as a commons is a key (rather critical) issue of the ongoing conversation and it refers to all aspects (treatment, distribution, consumption, etc.), with potentially conflictual implications on public management models, privatization policies, emerging solidarity attitudes.

Key in this sense are Hadrian water’s unique features, bringing the discourse on its exploitation in a middle ground between different domains. Depending on the assumed angle to look at it (legal, administrative, regulative, social, economic, organizational, cultural, etc.), different issues emerge, with unsolved ambiguities and conceptual voids.

As Hadrian water flows through an artifact, it cannot be fully considered as groundwater – so available (national and EU level) regulation about groundwater management/use offer rather incomplete legal/administrative frameworks (the water in the aqueduct runs underground and collects water from the aquifer, but is regimented water). Similarly agricultural water regulations couldn’t be fully applied, even if Hadrian water is compatible with gardening and irrigation, as the new resource is intended as fully “urban”. On the other hand regulation concerning potable water incorporates aspects (i.e. quality of water, distribution systems, monitoring, etc.) that are probably overscaled for the task, while regulations for urban wastewater point at different kinds of water resources (i.e. wastewater generated from domestic activities or as a mixture of wastewater generated by household, industrial, and rainwater outflows). In this framework, EYDAP is going to play a pivotal role: as the organization is appointed by law to be the provider of urban water (distribution, pricing, etc.) and the management authority for the infrastructures (pipes and tubing) it can have an active role in shaping this new service and pushing innovation forward. EYDAP is not new to promoting activities aiming at expanding the local conversation concerning water, water culture and new societal values related to it (i.e. “Athens water forum” the most recent initiative connecting private and public organizations with civic society around common ideas on water issues including co-creation workshops, surveys and local debates). When it comes to Hadrian water then, the challenge is also intercepting the ordinary mechanisms and regulations the organization brings about, and how much and to which extent new practices can be introduced is still a matter of debate.

With a distribution mainly organized around a “traditional” urban infrastructure (pipes), Hadrian water related services are in some cases considered into an “ordinary” framework for management, granted and organized upon existing laws on potable water (public company as a provider, regulated pricing, customers, bills, etc.). Conceptually very distant from the commons approach, this perspective could undermine the possibility to think outside the box and stimulate a more open/participatory management system. As for the regulatory framework, this perspective calls EYDAP directly into question. The interest of the organization in exploring the boundaries of its mandate is at stake, with a specific focus on pricing, mechanisms for access and distribution to the water resource, management policies, etc.: as an example hypothesis concerning pricing of non-potable water  is already on the table, with the idea of applying “symbolic” prices to Hadrian water in order to make it more interesting for customers. On the other hand the very concept of having “customers” for Hadrian water implicitly assumes non potable water as an ordinary service, paving the way for a more traditional organization of the service (with distribution policies all managed internally by EYDAP).

The knowledge concerning the capacity of the aqueduct speaks volumes about a great (potential) availability of water in the long run, not only to fulfill Halandri’s needs but apparently also to satisfy a larger request at regional level. This assumption could open the way to more market-oriented management models, based on the idea of an endless resource. A perspective bolstered by the relatively high disposable potable water at a low cost in Athens, this approach is counterintuitive to the more general idea of a sustainable and balanced approach to resources management (no matter if they are not scarce today… they could become scarce in the near future!). On the other hand the current national regulation concerning water distribution and management binds EYDAP to strong obligations – i.e. granting water quality and accessibility, granting the effectiveness and functionality of the water infrastructure in all its components, etc.-, making “the market approach” appear as the most reliable form of regulation (at least from the perspective of an institution appointed for the provision of a service).

A solidarity model to be invented

Differently from other sectors, water management is less commonly associated with cooperative and collective management models. Even if interesting (though very much site specific) study cases can be found in and outside Europe (i.e. italian cooperatives of water, spanish “comunidades de regantes”, or extra EU examples as Welsh waters, latin american experiences, US policies for farmers’ cooperative irrigation systems), EU Water Policies (1) tend to prioritize other kinds of topics, such as water protection, chemical and quantitative status, or equitable pricing. Citizens engagement and the possibility for a proactive role of communities in regulation and management of water hasn’t (already) been recognized as relevant: in this perspective, exploring other sectors/domains (i.e. energy communities (2), cooperative management of public services, etc.) could be helpful.

Where are we at with Halandri?

In the intentions of Halandri Municipality the non-potable water currently flowing in the aqueduct will be made available by building over 4 km long pipes network. In addition to this a flexible distribution system is being organized, to serve those areas that cannot be reached by the new water infrastructure. To do so the municipality has procured  two water tanks that will be pumping the water from the aqueduct and then distributing it in the city. The management of this service is planned to be on a co-decision and co-management level, having the engagement of citizens as a guiding principle. While the procurement process for the realization of the distribution network has started (under the responsibility of EYDAP), and a wide scale public awareness campaign concerning the presence of the aqueduct and the importance of water resources is being delivered, the Municipality is also surveying the interest of citizens for this new service – (nowadays about 60 individuals (3) expressing their preliminary interest to join). The public discussion concerning the water solidarity community will officially start next july during the second Cultural H.ID.RA.N.T. Festival, and be followed by local meetings in summer and autumn.

As an experimentation and the first implementation of an upscalable initiative, the Halandri experience will be the occasion to set the stage for the future to come. With a foreseen governance based on a horizontal multi-stakeholder cooperative approach, Halandri aims at establishing a model in which decision-making works on a collective base, notwithstanding the prevailing hierarchical governance models characterizing water companies and many other things at local and national level.

As for now three main pillars/actors are seen as responsible to keep the process going:

One of the biggest challenges comprise the legal and institutional framework pointing at the role and prerogatives of EYDAP, exploring the current greek rules and regulations concerning water to understand gaps, space of maneuver, barriers and potential to generate new approaches and proactively include the local community. Beyond this, the work to convince people to engage and to be involved is a second element to pay careful attention: proactivity, interest and capacity to have a say and gain power in the urban political process cannot be simply produced by design. It has to be fed and grown as the initiative goes on, tailored to the local community and generated as an outcome of the process (not as a prerequisite).

___________________
NOTES:
(1)  See as an example the EU Water Policy Framework Directive; (2) Energy communities organise collective and citizen-driven energy actions that help pave the way for a clean energy transition, while moving citizens to the fore. They contribute to increasing public acceptance of renewable energy projects and make it easier to attract private investments in the clean energy transition – as defined in DG Energy website; (3) 10 of them are interested in connecting to the water pipes, while another 40 would opt for the water tank (source: City of Halandri).

A state of art digital archive which collects historical evidence and testimonies...

The contemporary life of a roman aqueduct.

The article has been written by Chiara Lucchini, UIA-expert for the Cultural...